with all the MISSING posters, we forget the other part of the equation: they’re PEOPLE, not just photos, not just a fill-in-the-blanks story or a template.

just another lost soul among countless others.

many missing people are young children. you hope that they haven’t been trafficked or their organs harvested. like the untouchables in erik ravelo’s series of stark truths. 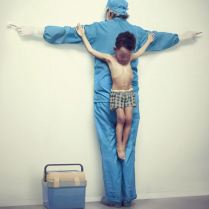 then there are the ones in their late teens, or 20s or 30s. a while back, 17-year-old ica policarpio made the headlines, and people fought when she was lost, and fought again when she got found. the family said her disappearance was due to “deep emotional distress.” if you look at missing persons posters closely, you will find “depression” and “traumatic depression” in the fine print.

but if there is no easy answer to “why,” people speculate. a foreigner of sound mind and body gets taken, they assume he’s left his family. never mind he’s a father, judging from the baby in the picture with him. why?

if there is no ready answer, we do not know, we focus on the “how.” were they forcibly taken? by whom?

and then, “where?” where were they taken? where did they go? where will they be found? god forbid they’ll end up where no one wants to end up. where the vulnerable have no protection.

there is a woman, jocelyn cornetes econas, born a year before me, who has been missing for more than 19 years. they’ve stopped counting the years, but they’re still looking for her. can you imagine what it takes to look for someone for more than 19 years? until what point can you sustain a search?

we got a lead. a man who left his name but not his number with me, said he gave P20 to a man (who looks like my dad, says the caller) sleeping on the street in the overpass near a hotel in quezon city. my sister called the hotel, but the guard said the overpass was too far away from the hotel for him to check. so we’re going to check it out. who knows. right? you know what the ringtone the hotel was using? a tinny, jaunty version of “let it be.”

aika buena says her father left her apartment unit and did not come home. “He is not familiar with the place since it’s his first time so he might not know how to go back,” she said, back in december, on the Missing People Philippines Facebook page.

it sounds so familiar, doesn’t it?
just like my dad’s story. left apartment. hasn’t come home. might not know how.